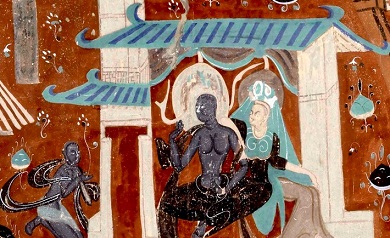 Mogao Grotto No. 257 shows a very strong western influence. It tells the story of the 9-colour deer popular in Central Asia. The story is about a 9-colour deer by the riverbank of River Ganges in India. Its fur has 9 different colours, hence, the 9-colour deer. One day a man fell accidentally into the river, and the deer jumped into the river and carried the man back to the land. The man was thankful to the deer and asked what he can do for her, but the deer said no need, but just don’t tell anyone that it is there, as people will start hunting for her fur if they know her whereabout. The man promised and go back his hometown. He then saw a poster from the Emperor that the Emperor made a dream about a 9-colour deer and wanted to hunt for it. Anyone who can tell her whereabout will be rewarded with gold, silver and land. The man cannot resist the temptation and disclose the whereabout of the deer to the emperor. When the emperor approached the riverbank, the deer saw the man with the emperor and understand what it is about and tell the emperor how she saved the man’s life and his promise. The emperor was deeply moved, and said even a deer understands right from wrong, how can man be so ungrateful? He then ordered no one can harm the 9-colour deer from now on.

This grotto shows a blend of Chinese and western technique, with various degree of shading when depicting human figure but structured like being painted on a traditional Chinese scroll. The artists used a strong and bold colour combination: red, green white and black. Also take a look at the horses. They are painted vividly in black, blue and white in a graceful manner. 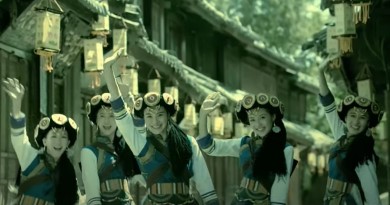 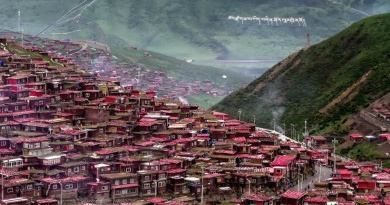 April 15, 2020 dorislam Comments Off on A Sea of Red in Larung Gar Buddhist Academy, West Sichuan 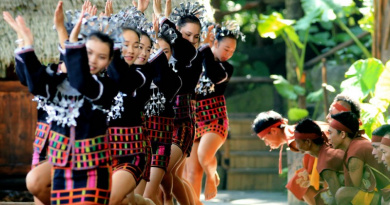