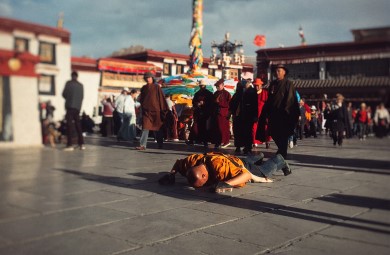 Under the order of Emperor Li, Princess Wencheng married the Tufan King Songtsen Gampo. It took her 3 years to travel from Xian to Lhasa, covering some 3,000 km. The princess, together with 1,000 maids and servants, set off in year 641 and arrived Lhasa in year 643. To show his sincerity, Emperor Li gave the princess the priceless 12-year-old Buddha statue as dowry, and a cart was made to carry the sacred statue along the way. The statue became the dearest dowry ever in history. Songtsen Gampo built the Ramoche Temple to house the statue. It was believed this 12-year-old Buddha statue was relocated to Jokhang Temple at a later time.

Jokhang Temple is at the city centre of Lhasa today. It is considered the ‘spiritual heart’ of the city, the most sacred place in Tibet, where Tibetans pilgrims walk around the temple spinning prayer wheels. Some even prostrate themselves before approaching the main deity.

According to the ancient history book, Songtsen Gampo first met Princess Wencheng in Bohai (now known as the Gyaring Lake in Qinghai province). He was deeply impressed by the beauty of Princess Wencheng, and the pomp and circumstance of the Tang assemblage, and vowed to build a city in honor of the princess. The city is called Lhasa.

October 6, 2016 dorislam Comments Off on Graffiti in Shanghai 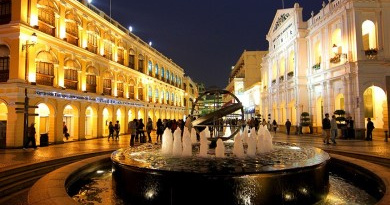 May 19, 2020 dorislam Comments Off on The Watch Towers (Diaolou)